One of Jason’s favorite restaurants here in Charlotte is an Indian restaurant called Copper. Indian cuisine consist of lots of spices and herbs and some dishes, like the Tikka Masala, can pack in quite a bit of heat as well. The Chicken Tikka Masala is one of the signature entrees at Copper and whenever we go Jason always orders it. It is consistently good and whenever we leave Jason is already planning when we can go back. After a busy week of traveling and lots of eating out I wanted to make him a special dinner last weekend so he could unwind and enjoy being at home. I think I took him by surprise when I mentioned that this is what I would be making since it’s a bit out of my comfort zone.  Or so I thought. 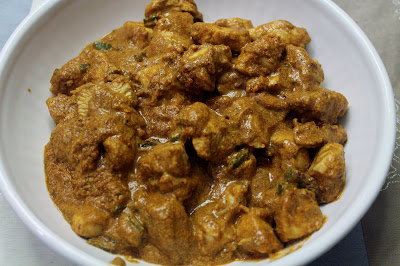 I have wanted to give this recipe a try for some time but most of the recipes I come across have an extensive list of ingredients and seem to be very labor intensive.  Two things that immediately turn me off from a recipe. I read a post recently from Chef in Training where she posted this recipe. Many of the ingredients called for spices that I already had on hand and the directions seemed to be easy enough. I have to admit, I was taken by surprise at how well this dish turned out and even Jason agreed that it tasted just as it should. Coming from someone who clearly loves Tikka Masala I took this to be a very good thing. I used plain non-fat Greek yogurt and substituted evaporated milk in place of the heavy cream as a healthier alternative than what the original recipe called for. I was nervous that these changes may affect the taste somehow but it did not at all.  If you love Indian food or are looking for a chance to give Indian cuisine a shot I highly recommend trying out this recipe. 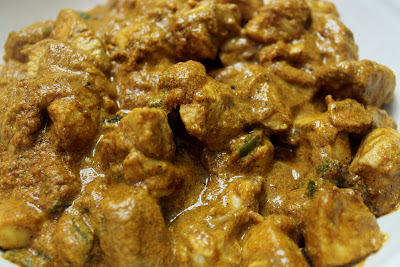 – Cut chicken breasts up into bite size pieces and toss in a large zip lock bag. Set aside.
– In a medium bowl, combine Greek yogurt, lemon juice, cumin, cinnamon, cayenne pepper, black pepper, ginger and salt. Stir to thoroughly combine. Pour into zip lock bag with chicken. Seal tight and shake and move chicken in bag to evenly coat. Place in fridge and marinate at least one hour.
– After chicken has marinated, dump into large frying pan (marinade included) and cook on medium-high heat until chicken is done and cooked through.
– Place chicken in strainer and let remaining marinade drip off. Do not rinse. Set aside.
– In a large sauce pan, melt butter. Add in finely diced jalapeños and minced garlic and saute for one minute. Next, add the cumin, paprika, and salt and stir to evenly combine.
– Add tomato sauce and evaporated milk to sauce pan. Stir to evenly combine. Once sauce has started to simmer, turn heat down to low and let simmer until thickened. This takes about 20 minutes.
– Add chicken to sauce and stir to evenly coat and combine. Let simmer a little more if needed until it thickens up how you would like it to. 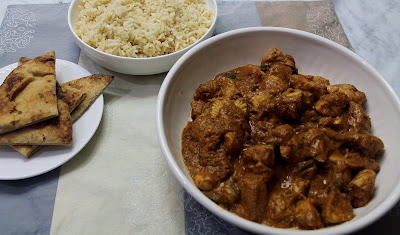 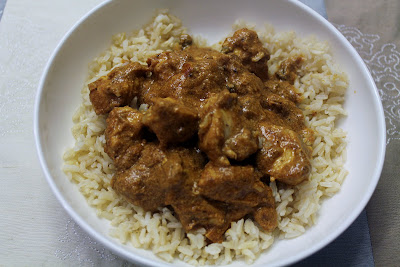