While Jason and I were in New York last December we shared the most amazing meatballs as an appetizer one night at a restaurant called Tre Dici . Typically ordering meatballs would not be at the top of my list but then again, I haven’t seen meatballs stuffed with ooey gooey cheese either. And lets face it, I LOVE anything that has cheese inside. Since that wonderful meal I have often thought about recreating that dish and last night was the night! I like to say these meatballs are made with love because they require some time to assemble but they are well worth every minute of it. 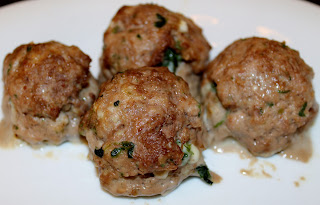 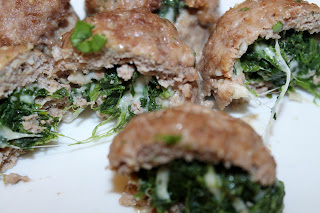 Directions:
– Defrost the spinach in the microwave and drain of any liquid. Once it is cooled mix together the spinach, mozzarella, salt and pepper in a small bowl and set aside.
– Combine the first 8 ingredients (everything except for the mozzarella and spinach) in a large bowl, mixing together really well.  I find that your hands are the best tool for this:). Season with salt and pepper.
– Grab a small portion of the meat mixture and begin forming the bottom of your meatballs. Using your finger make a small indention in the center for the cheese mixture. 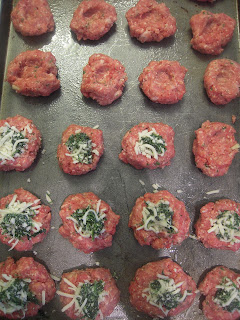 – Once you have formed the bottom half of the meatballs and stuffed them with the spinach and cheese mixture, grab another small amount of the meat to place over top. Using your hands place the meataround the cheese mixture until it is all covered up (or as best as possible) and formed into a ball. 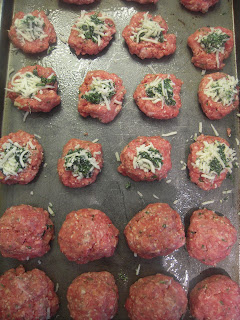 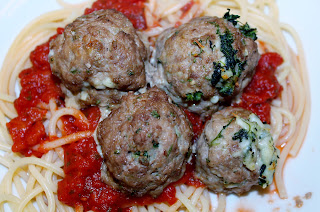 And of course you can’t have meatballs without the spaghetti.