Last weekend we had my parents over for dinner and I decided to make the same tenderloin that I made last New Years Eve. I wanted to do a few things differently this time around and I have to admit it was even better than the last time. I followed this recipe and used dates, blue cheese and chopped pecans for the stuffing but I wanted to try searing the tenderloin before baking it in the oven. However, after I stuffed the tenderloin and sealed it with the toothpicks I began to chicken out. It seemed like a lot more trouble to sear the meat than it was worth and I did not want to lose all of the goodness inside.
My dad encouraged me to continue with my original plan and I am so glad he did. (Thanks Dad!) The meat was absolutely perfect and everyone loved it. It wasn’t nearly as hard as I thought it would be to keep all the stuffing inside and I highly recommend adding this step to the cooking process.  Trust me it will be worth it.
Stuffed Pork Tenderloin
Directions:
– Butterfly the pork tenderloin by slicing the meat down the side and form a pocket for the stuffing.
– Add the chopped dates, pecans and blue cheese (eyeball it)
– Fold the meat back over to close in the blue cheese mixture and seal with toothpicks
– We used Lava salt that we brought back from our trip to Hawaii but you can use sea salt as well to sprinkle on the outside of the tenderloin
– Pour olive oil in a cast iron skillet and allow the pan to become hot. Add the meat and sear on each side until a brown crust forms (2- 3 minutes per side) 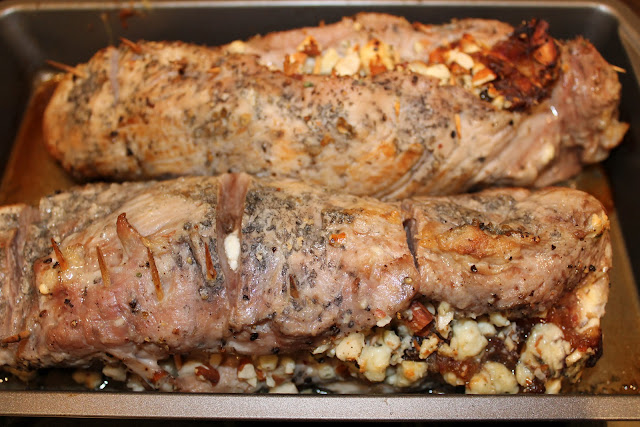